7 Reasons Why You Should Have Flaxseed Every Day

Diabetes has become a serious problem throughout the United States. In the past few decades this disease has reached epidemic levels as more and more individuals are experiencing the hardships that come with it.

Unfortunately these numbers have also begun to include teens and children as well. Roughly 24 million individuals throughout America suffer from diabetes, while around 6 million of those don’t realize they have it until it is too late.

As of 2007 the medical costs incurred by those with diabetes has reached well over $100 billion dollars. It is estimated that those numbers listed will double and even triple in the decades to come if nothing is done.

While individuals can be genetically predisposed to this disease there are ways to live with it and remain reasonably healthy. This involves lifestyle and behavioral changes that can promote better health and improved dietary habits. Listed below are some ways that individuals can help their situations and others who must deal with diabetes.

Many people throughout the US struggle with weight loss and have found that the available methods are not always right for them. Being overweight can lead to a number of health concerns.

Diabetes is not guaranteed to affect overweight individuals, but they are often at higher risk than others because of their chosen lifestyle. Such a condition could come from living a sedentary lifestyle or being forced to sit in one position day in and day out for work purposes.

Coupled with this is the very real concern of the way people choose to eat. Many people fail to see the overall health benefits in packing their own lunches for work, or cooking themselves something at home rather than ordering take-out.

Not only does a home-cooked meal taste better, it forces the individual to stand up, move around, and thereby burn at least a few calories in the effort. Next to exercise, cooking a meal is one of the more rewarding aspects of choosing a healthier lifestyle.

Eating healthy and staying active can help an individual to maintain or even lose weight. This is not a preventative method to avoid diabetes, but is instead a means of regulating the disease.

Instead of reaching for the bag of chips, try a tray of vegetables or fruit, or both. Eating whole grain foods, being selective about

the types of proteins one eats, and even cutting out a good majority of oils, harmful fats, and refined sugars can go a long way to creating a healthier diet.

Diabetics must be choosy about what they put into their body so as to measure the amount of insulin they need to take to balance their system. As a result it is better to eat wholesome and natural foods that can benefit the body and not make matters any worse.

Too much sugar, fat, or even protein at times can cause a dangerous imbalance that can physically harm a diabetic. Being aware of what is in foods and how they are made is a definite benefit to any diabetic. In this way it is even possible to prevent diabetes from affecting young children, as the development of a healthy diet early on can promote good health and better habits. 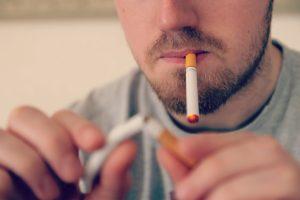 Those who don’t enjoy smoking or drinking are already on the right track. For those who enjoy both or one or the other however it becomes very important when diagnosed with diabetes to moderate drinking.

The sugars in alcohol can be beneficial in a way, but they must still be carefully watched and balanced out with insulin. Smoking is harmful enough on its own without being coupled with diabetes.

The immune system eventually begins to shut down as it is assaulted on more than one front. Diabetics are advised to quit smoking entirely and drink only in moderation.